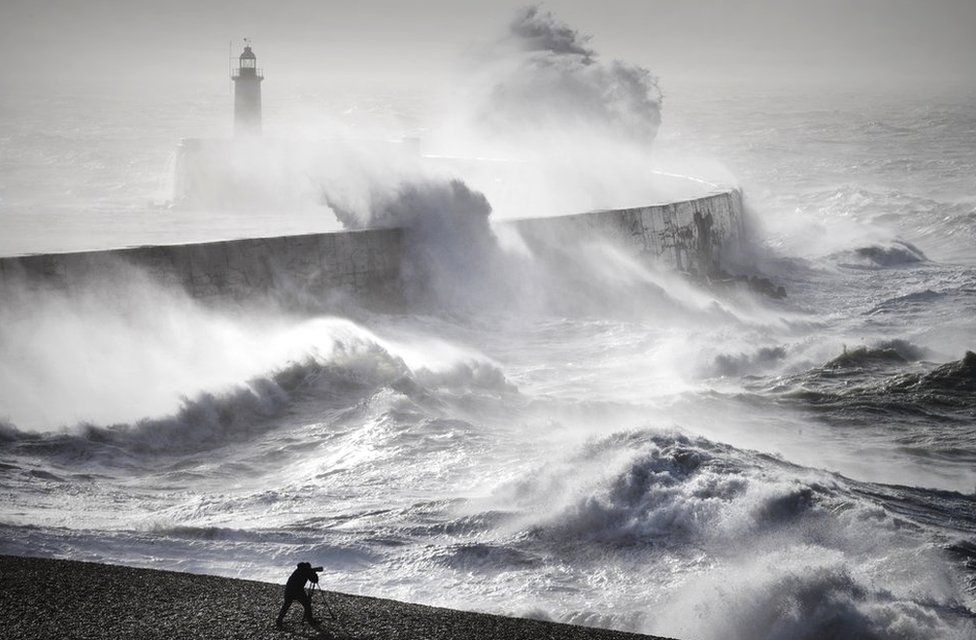 The UK is woefully unprepared to deal with changes occurring to the climate, government advisers say.

A report by the independent Climate Change Committee predicts warming will hit the UK harder than first thought.

It warns of more severe heatwaves, especially in big cities, and more intense rainfall, with an increased flood risk across most of the UK.

It says homes, infrastructure and services must be made resilient to floods, heat and humid nights.

The authors of the report on adaptation, or "climate-proofing", warn that global warming can cause damage running into tens of billions of pounds over short periods – and they say they're frustrated at the lack of government action.

The committee, also known as the CCC, says the UK is even worse prepared than it was five years ago, at the time of its last report on the risks of climate change.

The CCC is an independent group of experts set up to provide the government with advice on the climate crisis. 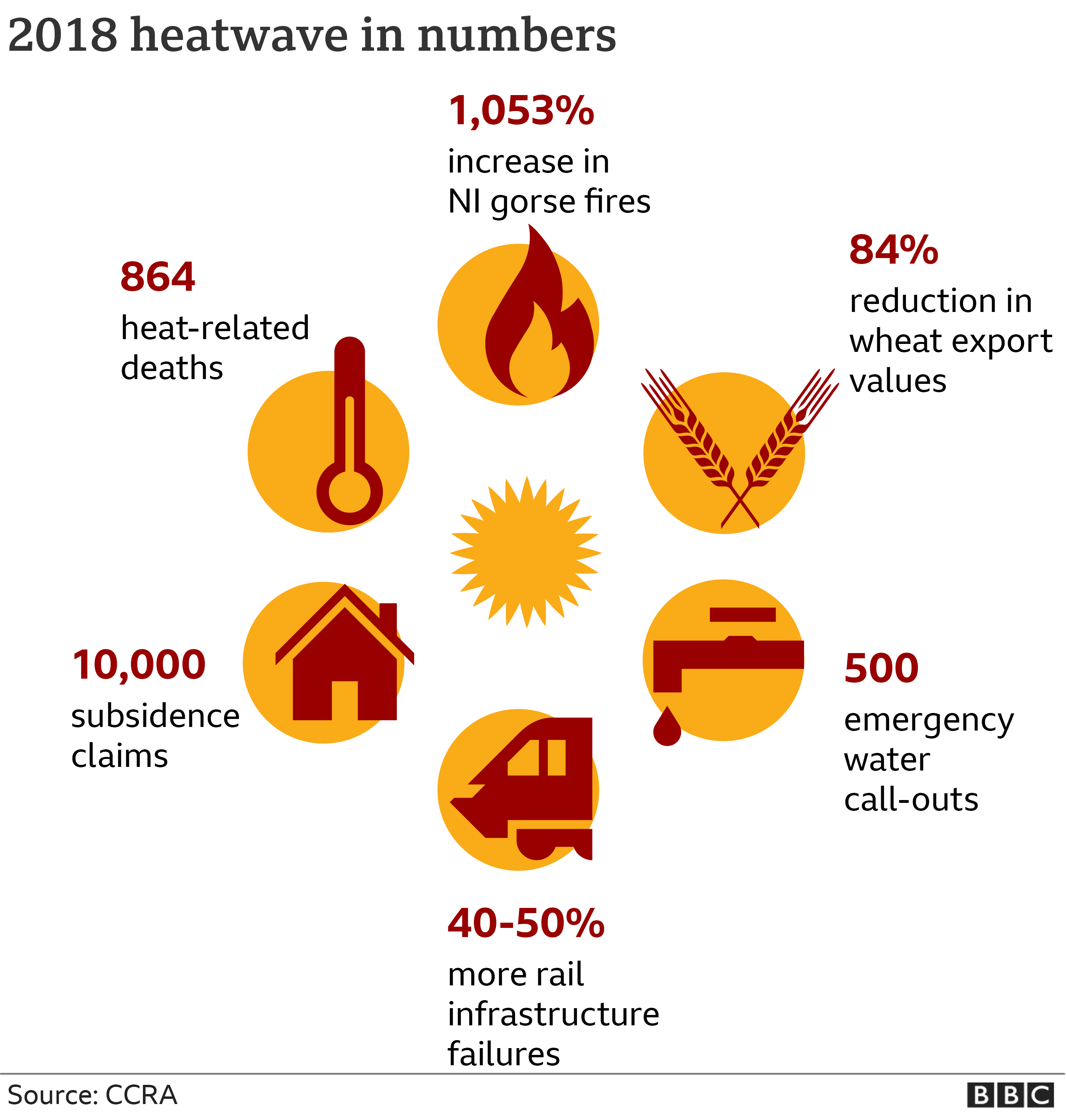 The chairwoman of the CCC's sub-committee on adaptation, Baroness Brown, said ministers appeared to be deterred from taking action by the upfront costs of protecting infrastructure. This is because the benefits sometimes are not seen for several years.

"They think they can put adaptation off until tomorrow," she said. "But now's the time for urgent action."

Responding to the report's findings, a government spokesman said many of the issues raised were being addressed in policy.

Here's what the CCC says the government must do to better prepare for the impacts of climate change:

There's a need to insulate buildings to save emissions, but overheating has emerged as a deadly risk – especially in flats. The government must force landlords to improve cooling by, say, installing sunshades. Ministers must ensure all new homes are built for a hotter climate. 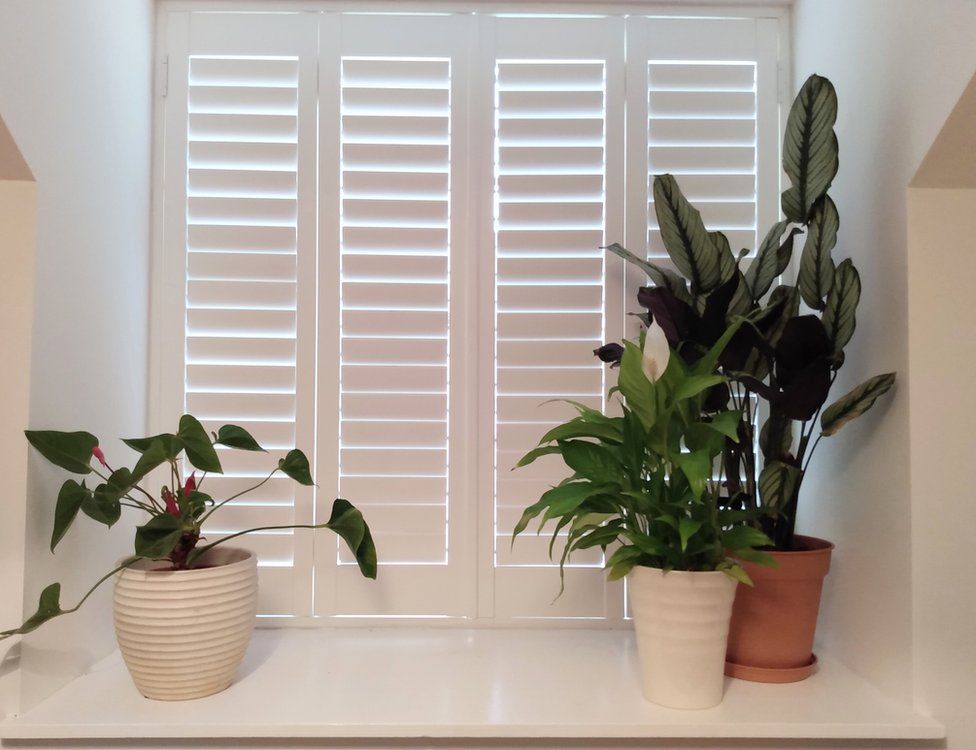 The state of UK nature has been declining for some time, with habitat loss one of the factors driving the loss of plant and animal species. Climate change will make the situation worse. Beech trees won't be able to tolerate conditions in southern England by 2050.

Three-quarters of upland species are likely to struggle by the end of century, the report says. Meanwhile, peat bogs currently help reduce the effects of climate change by absorbing carbon from the atmosphere. But if the world continues to warm at the current rate, peatlands could dry out, and begin releasing their stored carbon into the air.

The government must re-wet 100% of upland peat moors urgently, the report says. 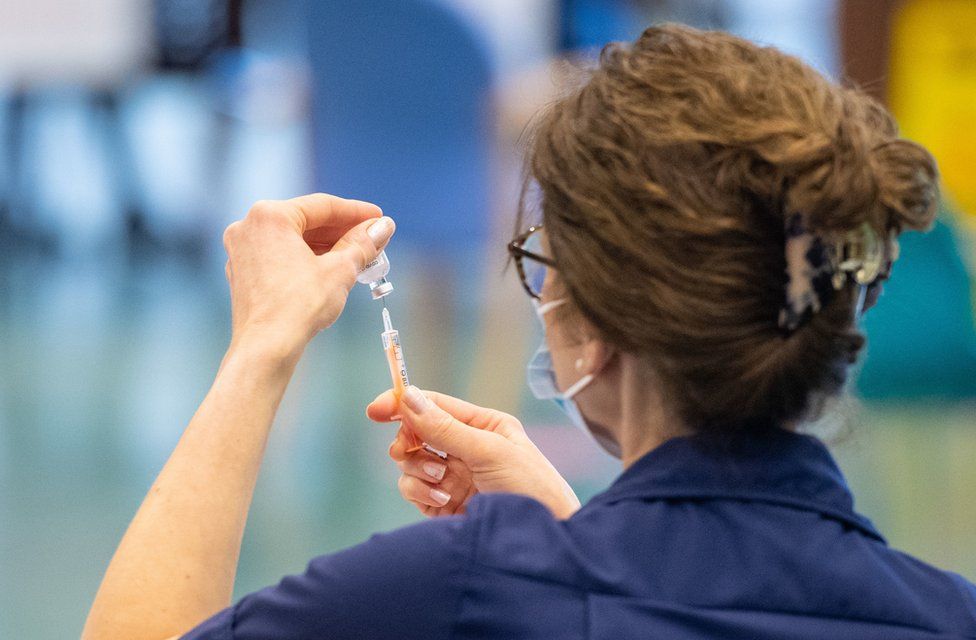 Climate change will place pressure on our increasingly connected world and the effects can take us by surprise. For example, around 10 years ago, flooding in Thailand caused a global shortage of computer hard drives.

Rising temperatures will put supply chains at risk for food, medicines, goods and services. The report says businesses must be told to make information available to the public on threats to their supply chains.

As the UK makes the transition to a low-carbon economy, we'll need more electricity for heating, lighting, and for our vehicles. So power cuts due to extreme weather will hurt the country more.

In one recent example, a lightning strike caused power cuts across England and stranded people on trains in August 2019. 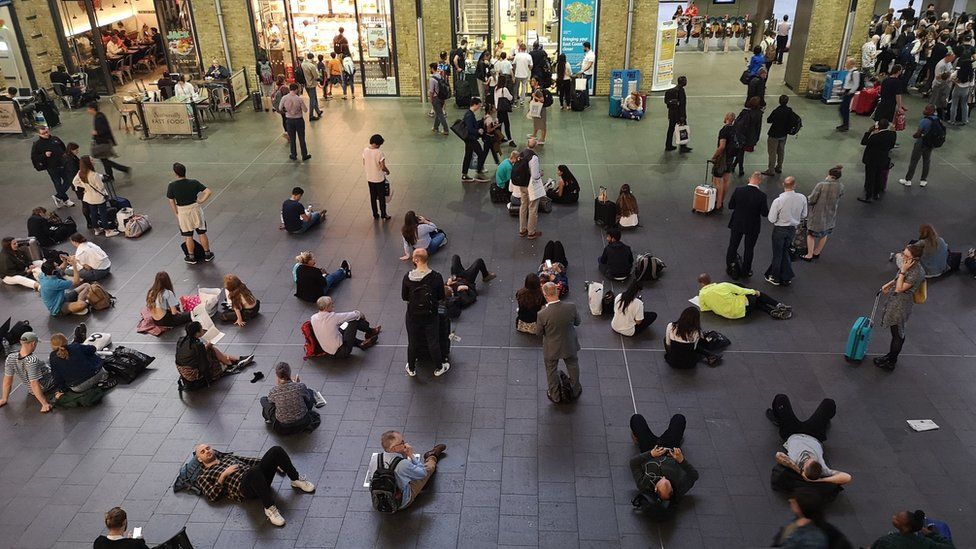 The committee says a heating climate will bring some opportunities for the UK – such as the ability to grow different crops, a longer growing season that will benefit farmers and fewer winter deaths from cold – but it says these are massively outweighed by the risks.

The committee's chief executive, Chris Stark, said CCC members were so frustrated with the lack of progress on climate-proofing the UK that they deliberately made this report "spiky".

He said: "It's really troubling how little attention the government has paid to this." He told BBC News: "The extent of planning for many of the risks is really shocking. We are not thinking clearly about what lies ahead."

While the world could warm by an average of 4C by 2100, the report say the UK government's plans are inadequate to cope even with a 2C temperature rise. 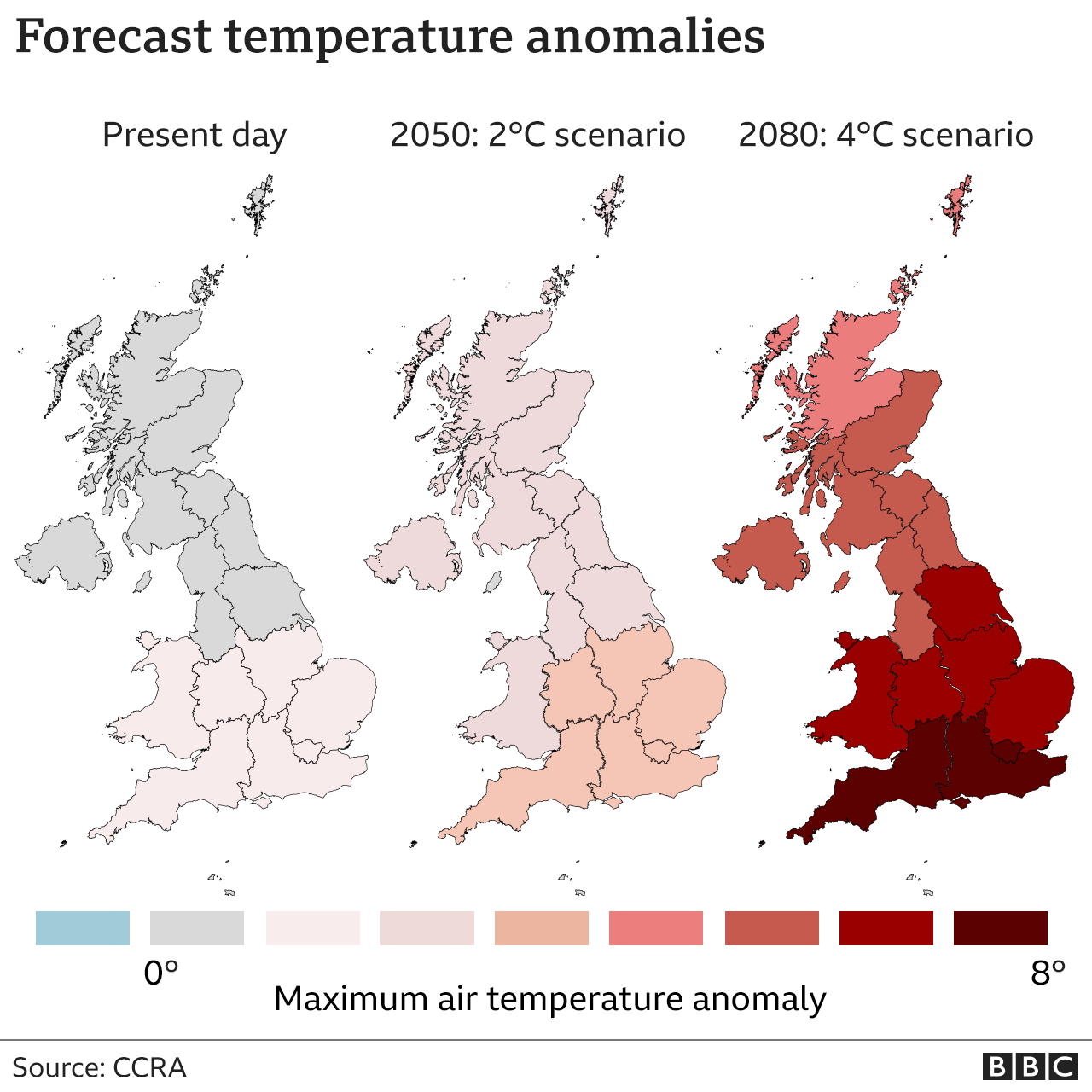 The report notes that, over the last five years, more than 500,000 homes have been built to inadequate standards. These will now need to be adapted at considerable expense to cope with more severe heatwaves.

The report foresees a potential "cascade" of problems from extreme weather, in which different risks combine.

These might include heatwaves and floods leading to IT failures and problems with sewage, water, power and transport.

Climate-proofing: What you can do

Kathryn Brown, head of adaptation at the CCC, has planted creepers to shade her walls. She recommends that home owners – especially in south-east England – should also fit window shutters to keep the sun off the glass. 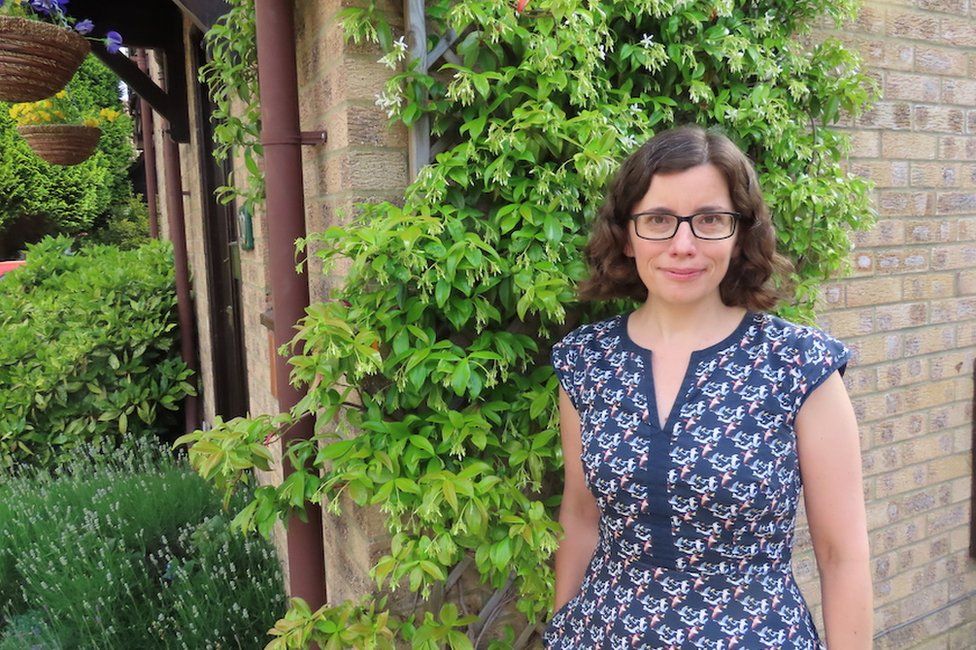 She also recommends people plant trees to help shade buildings, and avoid paving over gardens because the slabs can absorb heat.

She insists the government must help ensure that people in flats are protected from heatwaves, by improving ventilation and shading. Developers could improve shading by building in architectural features that shield homes from the sun's rays.

Kathryn Brown says people can do more to prepare for floods by signing up to free flood warnings, and looking at options for flood protection, such as door guards.

The document is based on a huge review of the scientific literature by 450 experts from 130 organisations.

One of the lead authors was Prof Dame Julia Slingo, former chief scientist at the UK Met Office in Exeter. She told BBC News: "Things are worse than we have anticipated."

Downpours that dump 20mm of water in an hour will become twice as frequent as previously projected. Winter extreme rainfall could be up to 40% more intense.

Surface water flooding will become a serious hazard as drains overflow during these rainstorms. 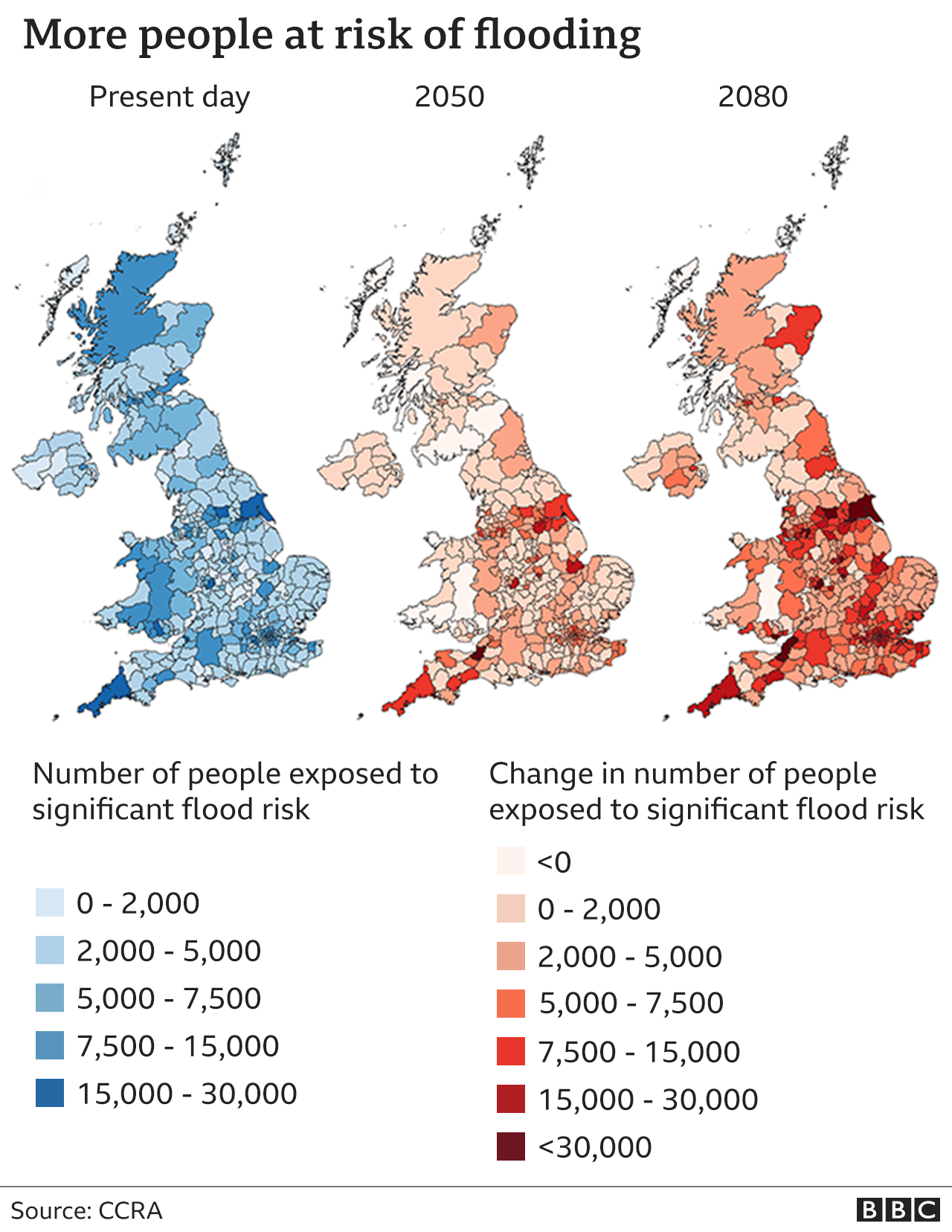 Co-author Prof Richard Betts, head of climate impacts research at the Met Office, told BBC News: "The main thing is that the risks of climate change to the UK are even higher than we appreciated five years ago."

Unless global emissions are drastically cut, he says, the UK could experience temperatures highs of 40C every 3.5 years.

A government spokesman said action to adapt to climate change was "integrated" across different government departments.

He added: "The UK was the first major world economy to set a target of net zero greenhouse gas emissions by 2050. Our plan to further reduce emissions in 2035 by at least 78% compared to 1990 levels is the highest reduction target by a major economy to date.

"We welcome this report and will consider its recommendations closely as we continue to demonstrate global leadership on climate change ahead of COP26 (the climate summit to be held in Glasgow) in November."

Scientists discover a new class of memory cells for…

The Largest Iceberg in The World Just Broke Off From…

Earth as you’ve never seen it before