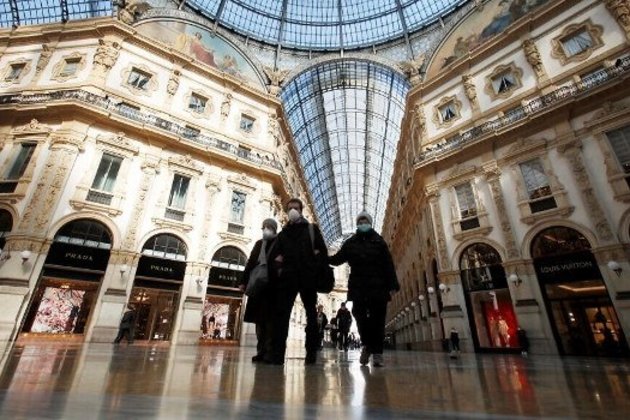 Nearly a quarter of Italians do not use the internet, and one third of households have no fixed connection, according to figures released by national statistics agency Istat.The government wants every Italian to have access to super-fast internet by 2026 – but it has a long way to go.Poor connectivity has become a serious problem since the start of the pandemic, which has forced people to spend months at home.

The last time a customer tried to pay by card in Anna Rita Pani’s grocery store in Colle di Tora, a small town outside Rome, things got a bit awkward.

“We had to wait 15 minutes for the card reader to work… Meanwhile, we were just standing there, staring at each other,” she told AFP.

Her card reader works with wi-fi, but Colle di Tora is one of the least connected towns in Italy – itself a digital laggard compared with the rest of the European Union.

Closing the gap is a priority for Prime Minister Mario Draghi and his drive to revive Italy’s coronavirus-ravaged economy with EU-funded investments.

He will on Monday present to parliament his plan to spend some €191.5 billion in loans and grants from the EU’s post-virus recovery fund between now and 2026 – with digitalisation expected to be a major focus.

For Italy, part of the challenge is to transform places like Colle di Tora, which are not so much cut off from the modern world, as a little behind.

The medieval town some 80 kilometres northeast of Rome is a relatively popular tourist resort, nestled on a ridge overlooking a lake and close to waterfalls, woods and natural reserves.

“The situation here is OK, but if you need to send a bigger email, it might take a few minutes instead of a few seconds,” said Mayor Beniamino Pandolfi.

Fortunately, Colle di Tora is on a government list of 200 municipalities earmarked for the publicly-subsidised rollout of fibre optic broadband.

This week, workers were laying fibre optic cables in one of the main squares, and telecoms company Open Fiber said super-fast internet would be operational by the year’s end.

“We’ll welcome it with open arms,” the mayor said.

At the moment the post office – which the town’s 360 residents rely on to withdraw cash, as there is no bank – sometimes closes down because its internet fails.

Bad weather can disrupt the signal, and is also a problem for mobile phone reception and streaming TV services.

Poor connectivity has become a serious problem since the start of the pandemic, which has forced people to spend months at home.

Simona Cardella, owner of a dry-cleaners, said her teenage daughter struggled with online lessons while schools were closed.

With video calls, “sometimes the audio is off, sometimes the video is off, and if the weather is bad the signal cuts off completely”, she said.

Sometimes unable to download the syllabus or upload her homework, her daughter was reduced “to do lessons via WhatsApp”, Cardella said.

The government wants every Italian to have access to super-fast internet by 2026 – but it has a long way to go.

Nearly a quarter of Italians do not use the internet, and one third of households have no fixed connection, according to figures released last month by national statistics agency Istat.

Meanwhile only 30% of households had access to latest-generation broadband in 2019, albeit up 6.1 percentage points from the previous year.

Italy – the eurozone’s third biggest economy – was ranked fourth from the bottom in the European Commission’s latest index of digital competitiveness (DESI), beating only Bulgaria, Greece and Romania.

For other residents, it would just bring them into the 21st century.

Pani’s 22-year-old son Nicolas is a keen gamer, but he complains it can take “four-five days” to download a PlayStation game that his friends in Rome can get in a couple of hours.

“It’s not like I cannot live without it,” he said. “But if (the internet) was a little bit better it would be nice.”

Doctors Identify The Best Treatment For COVID-19 Smell Loss, And It’s Not Steroids

Tim Dowling: I want a quiet birthday. Someone tell that to…

We Need to Manage a Careful Retreat From Climate Change,…

Too much sitting could hurt your mental health

A Single Telescope Has Detected Hundreds of Mysterious Radio…