What the velociraptor’s brain tells us about its diet Velociraptor was not just a speedy hunter capable of running down food. Its diet was also flexible.

Velociraptor was not just a speedy hunter capable of running down food. Its diet was also flexible. 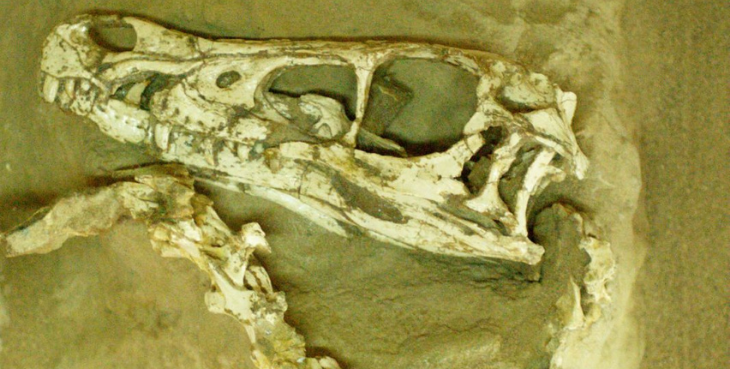 The brain anatomy and shape of an animal can tell us a lot about its life history and diet – both when dissected or reconstructed from fossils. In extinct organisms, the size of certain segments of the brain reflects their importance during life. For example, animals with large optic lobes, the area of the brain responsible for collecting and interpreting information gathered from eyesight, is interpreted as having a keen sense of sight and probably depended on sight during life. Using this concept, scientists have been able to better interpret the life history of one of the most famous dinosaurs in modern culture.

Velociraptor mongoliensis, the sickle-clawed dinosaur made famous in the Jurassic Park books and movies, has been assumed to be an agile predator since its discovery and naming at the turn of the 20th century. However, papers in 2010 and 2012 call this into question when fossils showed evidence of scavenging.

In one fossil, a juvenile V. mongoliensis had the wing bone of a pterosaur, a flying reptile from the age of the dinosaurs, in its gut cavity. Another had jaw bones of another dinosaur associated with the V. mongoliensis specimen. Because of evidence for scavenging, the pure predator lifestyle assumed for V. mongoliensis was called into question. Velociraptor may have been both a predator and scavenger. To test this, researchers studied its brain structure for evidence of a varying diet.

Using CT scanning and a process called segmentation, which uses digital images to build 3D models,  scientists were able to reconstruct the interior of a partial braincase of a Velociraptor specimen. The completed brain model indicated that the floccular lobes, the part of the brain most often associated with agility and balance, were enlarged. These lobes  made up 42% of the total length of the hindbrain and  7% of the total brain model volume.

In other words, the processing centers for agility in V. mongoliensis were very large and the species was, neurologically, adapted to move at and respond to quick speeds. Based on the results of the study, Velociraptor was not just well-equipped to bring down other dinosaurs. It was also neurologically well-equipped to move and orient itself while it ran down prey items.

The ears of V. mongoliensis were also reconstructed. Based on the shape, the researchers were able to calculate a likely  “average” and a high “hearing” frequency. The average hearing frequency was calculated to be 2368 Hz with the high hearing frequency determined to be 3965 Hz. This is kind of a high-pitched grating sound for humans, but not something you really hear on a typical day. These values mean that V. mongoliensis heard the world around it, hunted, and potentially communicated at a frequency near 2400 Hz. In today’s world, this would be similar to the hearing frequency of ravens, crows, and some penguins.

Broadly, this means that V. mongoliensis had a keen sense of hearing and was suited for running down its prey – both neurologically and with its teeth and claws. However, evidence for scavenging can not be ignored. It is possible that the Velociraptor, based on these new fossils, could both hunt live prey and eat already-deceased prey.  This means that the diet of V. mongoliensis was more flexible than we thought. It makes sense. The diets of today’s predator animals are also a function of their environment and age, and may also shift due to injury.

‘Wolf Packs’ of Predatory Bacteria Lurk in Our Soil, And They Play a Crucial Role

Country diary: why do birdwatchers prize the ring ouzel so…

Can fish and other marine animals drown?

The San Diego Zoo is racing to save these rare butterflies…