When an Eel Climbs a Ramp to Eat Squid From a Clamp, That’s a Moray 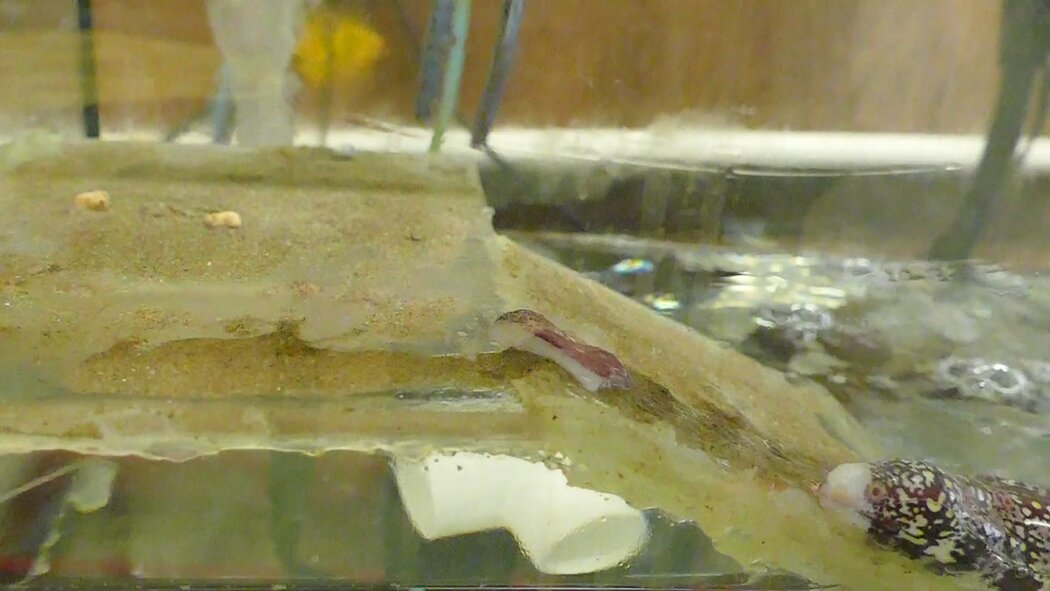 When an eel wants a squid that’s on land — God forbid! — that’s a moray.CreditMehta et al.

In the video, forceps nudge a piece of squid that sits on a ramp as an offering. Suddenly, a snowflake moray eel named Qani heaves its muscled bucatini of a body out of the water and onto the ramp. It opens its mouth and bites the squid. The eel pauses a moment, opens its mouth again and, as if its tongue were a conveyor belt, sucks the squid even deeper into its mouth using a secret second set of jaws in its throat.

This particular eel mukbang, to Rita S. Mehta, an evolutionary biologist at the University of California, Santa Cruz, was cinematic gold: footage that showed the bite, the prey transport with secondary jaws and the swallow. Her team had taped loads of footage of the eels feeding on the ramp, but none that showed the act from beginning to end.

Dr. Mehta first described the moray eel’s second set of choppers, known as pharyngeal jaws, in 2007. When a moray hunts, it seizes its prey with the teeth of its outer jaw, and then its pharyngeal jaws leap forward out of the throat and into the mouth to grasp the prey and drag it deeper into the eel’s body.

Now, Dr. Mehta has described how snowflake eels and other morays use their pharyngeal jaws to feed just as effectively on land as in water, according to a study published this month in The Journal of Experimental Biology.

Like many other fish, morays will eventually dry out if they leave water for too long. But Dr. Mehta and her colleagues cite a study from 1979 that suggests a moray’s outermost layer of skin contains certain mucus glands that may make these eels more resilient to time spent on land.

And morays climbing out of water came as no surprise to some observers. Lana Sinapayen, an artificial life researcher who grew up in the Caribbean island of Martinique, said local fishermen often caught morays by placing squids on the shore and waiting for the eels to arrive. “You only need a solid stick to take your pick,” she wrote in an email. Dr. Sinapayen was not involved in the research but wanted to emphasize that many local people have long known that morays can hunt on land.

Such behavior has also long been reflected in scientific studies. One paper from 1971 describes a moray that clambered into the same tide pool to hunt for five days straight.

When Dani Rabaiotti, an environmental scientist based in London, volunteered at an aquarium as a teenager, she met a moray eel who knew how to slither onto a ledge and wait to be hand-fed. “He’d learned it was easier than hanging out in the water with all the other hungry animals,” she said. 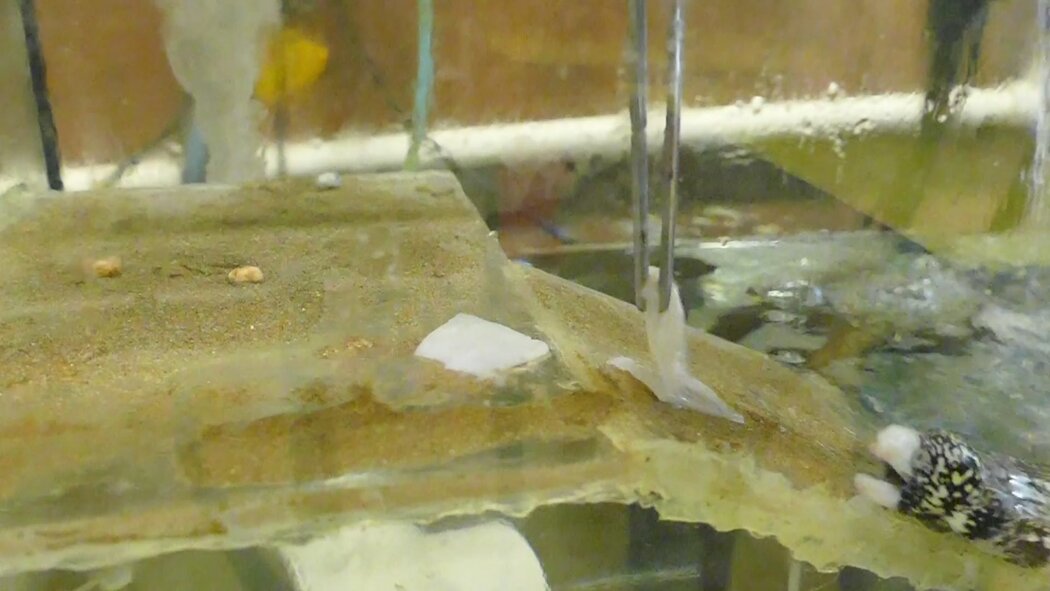 If the squid is too flat, there’s no problem with that, that’s a moray.CreditMehta, et al.

Dr. Mehta had also seen morays hunting on land — snagging land crabs on a beach in Bali — but the real question of her research was what the eels did with their prey after they bit down. Did the eels have to return to the water? Or could they swallow on land?

“Fish are mostly suction feeders and catch prey by sucking water in the mouth,” said Peter Wainwright, a fish biomechanics expert at the University of California, Davis, who has previously worked with Dr. Mehta but was not involved with the new research. He added that “morays have evolved away from suction feeding.”

In 2014, Dr. Mehta decided to train a small cohort of eels to feed on land and to film them in the act. She sourced snowflake moray eels from an aquarium wholesaler, and two of her former graduate students, Benjamin Higgins and Jacob Harrison, designed and installed a sand-covered Plexiglas ramp in each eel tank.

Over six years, Dr. Mehta and a rotating cast of students trained seven eels to feed on the ramp. By the end of the project, Kyle Donohoe, Dr. Mehta’s former lab technician and a co-author on the study, had developed a rigid ramp regimen for the eels.

Mr. Donohoe, who once worked in a lab where he trained seals and sea lions, proved a wildly effective trainer. As it turns out, training an eel is much like training a seal.

“Consistent feeding, increasing chances of reinforcement and patience,” Mr. Donohoe said. He trained Qani to wiggle farther and farther up the ramp and feed from forceps in just three weeks — the fastest of any eel in the study. 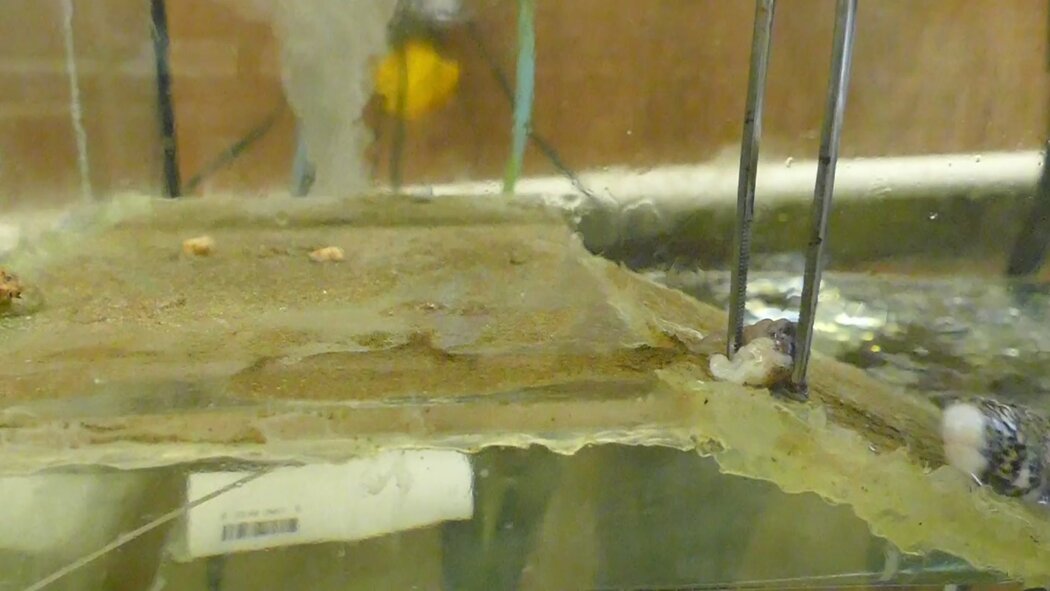 If the squid is so big, it still eats like a pig, that’s a moray.CreditMehta et al.

Another eel, named Benjen, joined Dr. Mehta’s lab early on. Benjen, who was nearly twice as long as Qani and the largest eel in the study, eventually refused to climb the ramp for the uniformly measured 1.1-inch pieces of squid that all of the other trained eels received. The mammoth moray would ascend the ramp only for chunks of squid so large and disproportionate to the eel’s body that one of the paper’s reviewers requested Benjen be stricken from the statistical analysis of the paper.

In Dr. Mehta’s eyes, one unexpected insight of the experiment was the resilience of eel memory. School breaks and holidays often interrupted eel training, but still, Benjen remembered the ramp. In the future, Dr. Mehta hopes a student will come along who wants to teach Benjen new tasks. He continues to live in the lab, where he still undulates, uninvited, onto the ramp, awaiting big squid.

Engineers surprised by the power of an elephant’s trunk

How Do the Most Massive Stars Explode? Bubbles With Titanium…

Thinking without a brain