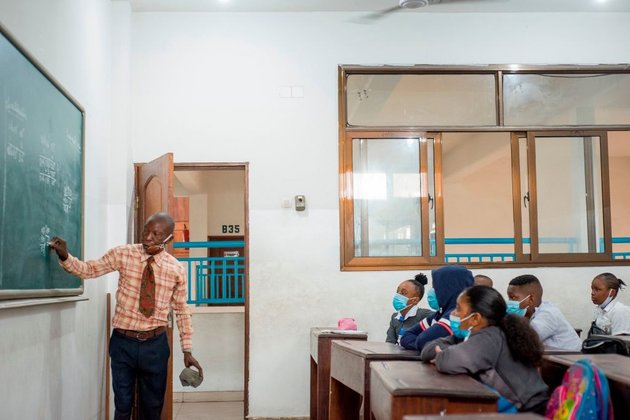 The primary and secondary education sector in the Democratic Republic of Congo (DRC) faces massive challenges. These include insufficient budgets, payroll fraud, a lack of infrastructure and teaching material, and poor opportunities for teacher professional development. Educational officials aren’t being held accountable for policy failures.

One of the biggest hurdles has to do with the teacher payroll. In general, the country’s teachers – more than 500,000 – work under dire conditions. In particular, a significant number of school teachers in the DRC have gone without government pay for several years. Since the early 1990s, parents have been called upon to step in to support teachers and schools financially by paying substantial school fees. Providing quality education isn’t always at the top of teacher priorities as they struggle to supplement their income with other activities.

Two years ago, the government decided to abolish primary school fees. The idea was that the government would pay all teachers. However, drawing on our long engagement with the DRC’s education sector and political system, we believe that this will be a challenge because of political, budgetary and administrative issues.

Is this the start of a serious reform of the battered education sector?

We believe that sustainable change in this system would require a thorough restructuring of the mechanisms of political accountability. In the meantime, we can only expect a realignment of existing patronage networks to the political agenda of the current president.

In November 2020, the DRC’s auditor general published a report which revealed the depths of the payroll crisis. Masses of teachers remained unpaid while new ones were being added to the payroll. There was also an influx of administrative staff, diverting resources from teacher salaries. The report revealed the embezzlement of 62 billion Congolese francs (about US$30 million) and other forms of payroll fraud.

Payroll fraud permeates the public sector, and this has been a persistent problem in the DRC. The report implicated senior civil servants and staff from the ministries of budget and finance, education and the teachers’ payroll agency. The issue reverberated in the provinces as well. Several officials were placed under arrest.

The boundary between “state” and “society” has become a twilight area in the DRC, whose dynamics are governed by specific social pressures, economic rents and political considerations. For example, relationships with politicians, due to party affiliation or origin, increase a school’s chances of being added to the payroll. Another example is the attempted removal of 1,179 schools from the payroll. As reactions by educational leaders suggest, some of these schools have properly functioned for decades. In the past, masses of other schools have obtained their decree via informal processes, void of any educational planning. What is the difference between schools functioning on “false” decrees, and schools functioning on decrees based purely on patronage without any technical preparation and monitoring?

Government actors who benefit from the current structures have few incentives to clean up the payroll. However, teacher union politics also partially explains these continued dynamics. There’s a lack of strong, independent unions and a lack of trust between teachers and unions. Also the political co-option of union leaders, for example by mobilising them as consultants or by inviting them into party politics, has weakened the unions’ impact. Out of 40 unions, only a handful can be considered to be functioning properly. With a dozen pseudo-unions and a high number of unions which hardly function, Congolese teacher unions have been effectively silenced.

Trying to reform human resource and payroll management means taking away a massive resource of patronage and electoral politics from hundreds of bureaucrats and politicians.

Public statements to fight against payroll fraud seem to materialise at strategic moments. In 1979, the former president of the Democratic Republic of Congo (then Zaire), Mobutu Sese Seko, stated that:

For Mobutu, it was a way to attract World Bank funding.

So, what was the reason for the most recent announcement? The investigations, and Mwaba’s appointment, are nested within Congolese political dynamics, and it is necessary to look beyond the education sector.

For 15 years, according to our sources, the education ministry functioned as a cash cow for long-term ruler Joseph Kabila’s party. When Felix Tshisekedi was elected president in 2019, in what is seen as a rigged election, he formed a coalition with Kabila. The investigations and sentences of high-level educational officials sit within Tshisekedi’s much wider use of “judicial harassment” against key persons from Kabila’s camp.

Given that Tshisekedi’s coalition remains unstable and based on members of parliament who will “condition their support upon payments or extractive opportunities”, he will need all possible sources to gather funds. This is all the more the case as the DRC looks forward to a new round of elections in 2023.

So this is the situation in which the president finds himself: while the judicial investigations and new appointment indicate that using the payroll for patronage purposes is being addressed, now that he’s completely in power himself, Tshisekedi might be tempted to deviate from the norms through which he won his position.

With an education sector struggling to cope through patronage politics and informal arrangements, and with all of the high level dynamics at play, can the new education minister bring much needed change? We truly hope so, but he would have to swim against a strong tide.

For a longer French version of this article, please see here.

For The First Time, Scientists Have Connected a Superconductor to a Semiconductor

Sugar not so nice for your child’s brain development,…