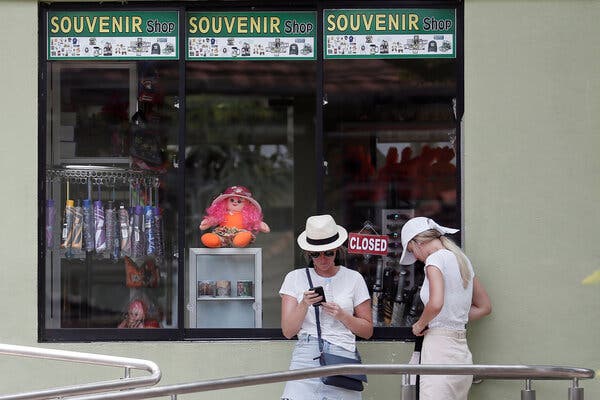 Tourists outside the Dehiwala National Zoo in Colombo, Sri Lanka, last year, when it was closed because of the coronavirus.Dinuka Liyanawatte/Reuters

COLOMBO, Sri Lanka — To prevent the worst of Covid devastation, Sri Lanka imposed lockdowns and stopped flights from abroad for nearly a year, battering the economy and drying up a vital tourism industry.

For animals in the island nation’s zoos, however, it’s been a jolly time.

Amid the absence of visitors, animal births in the zoos rose 25 percent over the past year, according to Ishini Wickremesinghe, the director general of Sri Lanka’s Department of National Zoological Gardens. Particularly striking, she said, is that several animals that do not have a history of breeding in local zoos have given birth.

“Animals are actually having a less-stress and relaxed time with no people around,” she said.

Sri Lanka closed its zoos in March 2020, briefly reopening to visitors earlier this year before closing again as coronavirus infections rose. Among the animals that have bred for the first time are a black swan, a white peacock and a nilgai, the largest antelope in Asia. Others that have produced offspring include an Arabian oryx, a black duck, a scimitar-horned oryx and a zebra.

“We also have three new lion cubs,” Ms. Wickremesinghe said. “After years, the animals really got a good break.”

The cubs are about six months old now. With no visitors around, adult lions are free to roam around their enclosures and consort with potential mates.

At Sri Lanka’s wildlife parks, officials could not confirm whether breeding was on the rise, but animals are “definitely stress-free,” said Manoj Vidyaratne, the warden of Yala National Park on the island’s southeastern coast. “Usually, we see about 400 vehicles in the park daily,” he said, “but this time there is no one.”

Creatures in captivity elsewhere, too, have taken advantage of the pandemic to procreate. Last April, two giant pandas successfully mated at the Hong Kong zoo, which was closed to visitors due to the coronavirus.

Sri Lanka, an early success story in containing the spread of the virus, has experienced a recent surge and is recording nearly 3,000 new daily infections, according to a New York Times database. The pandemic has worsened the economic woes of a country that was already struggling to recover from terrorist attacks in 2019.

Sri Lanka’s zoos, which house about 4,000 species, are among the tourism-dependent country’s major attractions, drawing more than three million visitors a year before the pandemic.

Despite the impact on revenue, Ms. Wickremesinghe said she hoped to keep the zoos closed until cases drop, fearing that primates could catch the virus from an infected visitor. “We don’t know what to do if that happens,” she said.

The mystery of Denmark’s vanishing wolf pack – are hunters to blame?

Turn the Lights Out. Here Come the Birds.